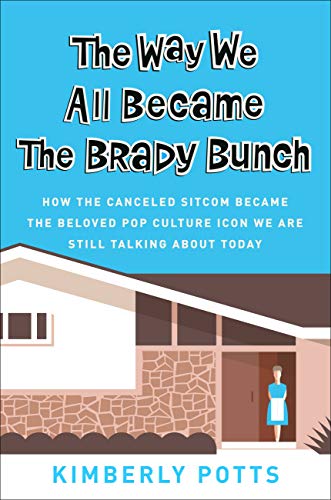 The Way We All Became The Brady Bunch

In celebration of the Brady Bunch’s 50th anniversary, TV writer Kimberly Potts writes a Seinfeldia-like definitive history of the show that changed the family sitcom and made an indelible impact on pop culture.

There isn’t a person in this country who hasn’t heard of The Brady Bunch or heard repeatedly its earworm of a theme song. The show has lived a dozen lives, from its original comedy debut, multiple spin-offs, and big-screen movies, to the football legends, movie superheroes, and Emmy-winning TV auteurs (including Vince Gilligan and Jill Soloway) it has inspired.

Not bad for a series that was given a critical drubbing when it premiered and never finished a season ranked higher than 31 in the ratings.

In The Way We All Became The Brady Bunch, TV historian and entertainment journalist Kimberly Potts will take readers behind the scenes and into the history of the series to document how, despite middling ratings and negative reviews, Mike, Carol, Greg, Marcia, Peter, Jan, Bobby, Cindy, and Alice emerged as America’s favorite family. And why, as the show celebrates its 50th anniversary, its title as shorthand to describe blended families, large families, and happy families, and the prevalence of its iconic opening sequence—reverently spoofed by a diverse lineup of TV series that includes Sesame Street, Full House, and Family Guy—are examples of how its influence on pop culture endures.

Filled with the kind of insights, interviews, and stories that would make Scoop Brady proud, Potts takes a deep dive into the journey of the show and its most memorable moments to shed new light on Brady fans (including famous ones like Michelle Obama and Tom Hanks), Brady surprises (XXX Brady, anyone?), and Brady might-have-beens (Carol as a widowed cougar?!). For both the casual Brady viewer and the most devoted aficionado of the series, The Way We All Became The Brady Bunch promises a delightful, revealing read, and definitive reasons why we’re still happily talking about this show 50 years after it began.